Mazunte: A change of pace. 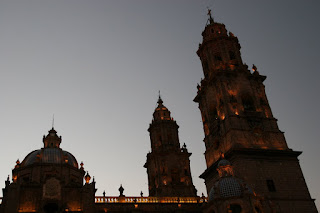 Danny and I eventually had to leave our secluded rural paradise in Nuevo Urecho and return to Morelia to start the next leg of the journey. We spent only three days in Morelia the second time through. That was long enough to go buy pounds of local sweets from the Mercado de dulces as well as see some friends that we’d met earlier. Our bags loaded and our goodbyes said we headed to the bus station. This happened to be at night, around 2 am, because of a party I’d been at that night. We assumed that we would rest on the bus and arrive at our next destination, Mazunte, by sundown the next day. Of course, since we are traveling, this proved to be a completely unfounded belief.

Our night ride to Lazaro Cardanes, a big hub city on the coast, was pretty uneventful. We had no trouble locating a bus to take us to Acapulco and we boarded it only an hour later. The ride to Acapulco is a fairly long one taking about 8 hours or so. Sadly, we managed to extend the trip by a few extra hours when we stepped off the bus in the middle of nowhere. Well, it was a town but not one I’d ever seen on the map. We had woken up passing a sign outside of town that pointed the way to Acapulco but at the time our travel-fogged, sleep-deprived minds assumed it meant Acapulco was coming up. We jumped off at the bus station and went inside to look for buses to Puerto Escondido, the next point of departure, only to find that there were none.

Still thinking this must be Acapulco I stopped a taxi and asked if he could take us around the corner to the next bus station, Ejido. He laughed and said, “That’s in Acapulco.” I said I knew that and wondered why he seemed shocked to be asked to go to a place that appeared to be around the corner from where we were now. I pressed the issue and he laughed again, calling his nearby taxi friend over. This man spoke a little English and I asked him the same thing. He told me he would do it for one hundred. “Pesos?” I replied. “No, in US dollars.” I asked how it could be so expensive and he said because it was two hours away. Oh my surprise when I later found out that we jumped off in Texpan and we ended up waiting 3 hours for the next bus to pass. I felt that, once in Acapulco, our luck would surely change. Wrong. We went to buy the tickets to Puerto Escondido, which left in an hour at 7 pm, only to be informed that it would actually be the 2 am bus we would take. So, we sat at the bus station for the evening after a meal on the street of canned refried beans, tostadas and vinegared chilis. We arrived in Puerto Escondido in the morning and finally made it to the last hub station in Pochutla. A taxi ride to Mazunte got us in at 4 pm Saturday after leaving Friday at 2 am. We were smelly, bedraggled and tired. Fortunately, our new home was close to the sea and the warm, wet air met us with a gentle touch as we gathered our bags from the taxi. 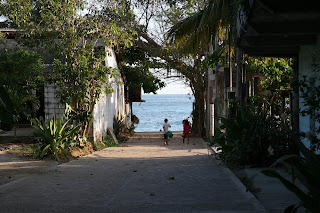 We met our new Couch Surfing friend, Pete, at his RV which was parked in a coconut grove a stone’s throw from the beach. He was relaxed on a cushion that sat on the woven reed mat placed on the ground. He welcomed us to Mazunte and we fell to stripping off our northern layers to don the southern garb of swim trunks and sandals (shoeless in Danny’s case). Soon, we too reclined in the sun listening to the waves crash on the shore. The idea of leaving too quickly evaporated into a grey and bothersome mist that was washed away with the first headlong dive into the ocean. And herein lays the problem I’ve been having about writing this post. How does one describe a place like Mazunte in any linear way? All of my words merely grasp at the feeling of contentment I felt while I remained in that paradise, tucked away along the balmy coast of southern Mexico 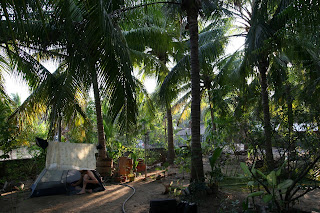 Here, I’ll give you a few images to get you started. Imagine waking up each morning to the sun rising over the tops of coconut trees. Hear the rhythmic crashing of the waves only 50 yards away. Smell the salty air carrying the scent of lush fruits and flowers gently through the campground. You can hear that, as usual, some neighbors have stopped by with their instruments and are busy playing a morning reverie on guitars, drums and clarinets. You sit with your friends and new neighbors eating fresh coconut graciously harvested, husked and opened by Danny. You all laugh and tell stories, play songs and sing, eat fruit and impatiently await the arrival of the lady selling tamales. You laugh when you think about home, deadlines, rain and routine. 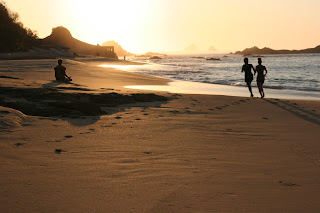 Days are spent splashing in the waves, running into friends throughout town and enjoying the pure beauty of the place. Warm sun bathes you as you stroll across the hot sand, making forays to the water’s edge to cool your feet now and again. No clouds mar the pure azure sky and rain is never seen out of season. The nearby point, Punta Cometa, is the perfect vista from which to watch the suns gentle descent beyond the waves of the horizon. Yet, despite this paradisiac landscape, there are few travelers who make the time to get out that way. If only people knew what they were missing they would be there even as I write this. You can have the whole beach to yourself in the morning, a lunch of fresh local fruits and tamales and top it off with a night of entertainment by whatever amazing group has formed over the previous week. 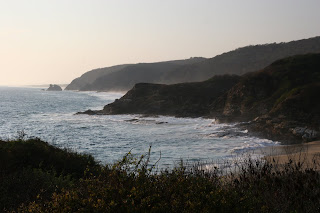 If you ask someone the time you are more likely to receive a laugh than an answer. The sun and the moon become the natural clock to follow while you’re in Mazunte. It makes no sense to set a firm timeline when everyone is watching those omnipresent celestial timekeepers as they keep a perfect rhythm day in and day out. Perhaps this is the reason that, without any schedule to follow, things seem to happen synchronistically. At least, that’s how it felt to me. No amount of planning would have led me to have the experiences I did while I was there. For instance, we happened to arrive when a gaggle of musicians, acrobats, jugglers and performers from Mexico and abroad descended on the town for weeks of performances and jam sessions. 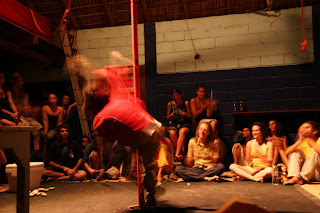 Night after night we would all gather at some local haunt, sometimes a bar and others a hostel, to watch acrobats twist, jugglers amaze and clowns entertain. The audience was part of the show as well, jumping in to interject or participate as the need arose. A woman became an spur-of-the-moment prop and a little boy became the body for a clowns hands in a juggling act. The whole show was in Spanish but still all of the English speakers could figure out the jokes and laugh along with the rest. Following these hours of laughter we would all hang out to listen to whatever local band was playing that night. Each night a different musical style followed. Blues, Rock, Balkan and Gyspy bands kept the people moving in the warm still air of the Mazunte nights. These same musicians were the ones that came by to teach us and hang out with us during the day and it was amazing to watch them really let loose with others of their caliber.

As I mentioned, everything lined up with this sort of providential synchronicity. For instance, one day my E string broke on my guitar. Even as it happened a guy we’d met before, Deigo, came up to set camp in the same coconut grove as us. He was one of the amazing guitarists staying in town and he knew the music scene in the area. He offered to take me to a music shop in nearby Pochutla for new strings the next day. Not even ten minutes passed before our friend Manún came by carrying her guitar. She offered me one of her E chords for free and even offered to help tune it up. I couldn’t believe how quickly things seemed to manifest while I was there. Even latent talents manifested themselves in the weeks I stayed there. Which was good because I was starting to have an albatross around my neck due to the lack of developing musical talent.

Why did I feel I suddenly needed musical talent? Well, you see, I brought a guitar along with me that I didn’t know how to play on a long-distance, long-term trip. Because of this I get to enjoy some extra fun perks such as carrying a bulky instrument that gets in the way traveling and everyone asking, “Can I hear a song?” At the time I would usually mumble something about being a beginner and they would either ask to play it or ignore it. These awkward encounters were starting to really give me some motivation to figure it out and with all the musical talent literally walking by me every hour I realized I couldn’t pass up the opportunity to ask for some (read: all of the) pointers. Just like that, with the decision to have teachers, I was surrounded by a horde of instructors and well-wishers to help me on in my quest for chords. Jam sessions suddenly became the daily routine and I always found myself in the midst of spontaneous melodies and impromptu verse. 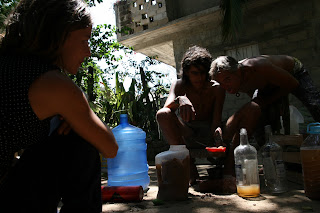 The travelers who come through Mazunte seem to have a similar vibe. In fact, there is a uniquely common language among most of them. If you go there be prepared to hear things referred to in terms of there “energy,” “vibration” and capacity to “resonant” with someone. Now I’m not making fun of that, in fact my speech is peppered with those terms now, but it made it clear the kind of soul-searchers, guru-seekers and spiritually-oriented people one meets there. Of course, this meant that people were very honest about their feelings and opinions but also with their sense of love. The whole community vibrated with a shared love between the travelers and one always found themselves making new friends each day. This was one of the many reasons that people tended to stay far longer than their itinerary had allowed for.

And how long had we planned on staying? Well, initially we’d planned for 3 days but with each day we became more content to reply, “Mañana.” We found out that just about every traveler there was saying the same thing. Those who intended to be there a few days were always at the few week mark and those who intended a week-long stay had become near permanent residence by the time I spoke to them. When we finally started planning our bus ride out of there we realized that we had been in Mazunte for twenty days. Even now, a month later, I am still calmed and made content when I realize that I will someday pass through there again. How long will I stay when I return? Let’s just say I’m planning for a week. 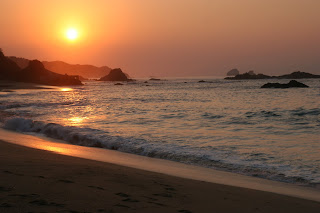 Posted by Beyond borders at 3:14 PM