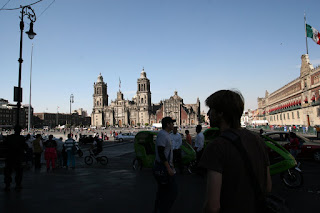 To begin, I must say that I knew very little of Mexico city before I came here. Oh sure, I’d heard a lot of stuff about it. Like the things I saw on speedy Gonzales or the nightly news telling me about the death rate that just climbed and climbed. Honestly, I was surprised that I wasn’t shot down by drug lords on my way down or that I was able to get around with all of the bodies I expected to see littering the street. I’m kidding, but only a little. Everyone got such a look of fear in there eyes when I mentioned I was going to Mexico city. The death toll was quoted to me by everyone I knew and I think if they had it there way I would only be on the street from 12:00 pm until 1:00 pm or so. I knew a little about Mexico as a country though, at least up until the era of indepedence. I had studied Latin America in College. I knew about the history of the conquests, the loss of indigenous culture to the Spaniards and the tentative place Mexico has in the new “free” world due to politics and economics. That being said, let me tell you what I didn’t know.

I didn’t know that the people of Mexico city were so very generous and kind. For example, I arrived an hour and half late to the city at midnight. The man we had contacted to meet up with, Marco, had been sitting at the airport for a few hours at that point. When we arrived he was not angry, just concerned. He said that his brother in law had gone home but that he’d gotten us a taxi. We offered to pay but he wouldn’t hear of it. Also, just before all of this, I had called his cell phone which he had left at home and had spoken with his niece. So as we walked to the taxi we were all surprised to see his brother in law’s family drive up at one in the morning! They took us to their house and put us up in a great room, offering us anything and everything we might need. Of course, all of this was free I might add.

The next day when we woke up we found the house empty except for Marco’s mother who was busy in the kitchen. She doesn’t live with them but travels to their house everyday to cook and help the family out. Now, she found two vagabond boys from the U.S. with no Spanish and hungry stomachs. She decided it was time for us to go to the market and through signs and rapid Spanish made it clear we were to follow her. Marco had mentioned that in the area we were staying in, Los reyes La Paz, had no English speakers that he knew of. Yet, as we bumbled through the market we found that a few vendors spoke great English.

One large young man came up to us saying, “Whatchu looking for, eh?!” “oh, we’re just trying to buy some spices and food for today.” we replied. He then proceeded to lead us around getting the ingredients we needed at various stalls, the whole time pleasantly peppering his speech with English cuss words. He asked us in a concerned way, “you want some f***ing spices? Ok, lets go over here. Oh, you need some f***ing vegetables? Sure, let’s go here.” So, with his help and Grandma’s assistance we were able to get around just like home.

Well, not just like home. The market was far more fun than any sterile supermarkets we go to. Yes, even more so that Walmart, with all of it’s “interesting” characters, although they have these as well. All around us we saw fruits and vegetables pressed up against images of the baby Jesus or the saint of death. Electronics stands shared the same wall as the butchers, with pigs heads swinging ominously close to new Walkman or cell phones. You might be buying some dried beans at a stand only to look over into a twilight lit alcove containing the image of the the mother Mary, tiny cherubs dotting the wall and candles perpetually burning. Even in all of this chaos of color and sound it is amazing to realize how clean it all is. Everyone is always sweeping, washings, throwing water on the ground.

I also thought that Mexico city would be very dirty because of what people told me. I was wrong. The streets are cleaned daily and people wash their houses out all of the time. You see sweeping, washing and cleaning more here than you do in the U.S. I feel. Oh, also, the smells are wonderful! Breads baking, spices cooking, tortillas pouring out of the large machines in which they’re cooked. Clean linens, fresh herbs and holy sacraments mingle to create the most pleasant aroma as one walks through the seemingly endless lanes of the market. Many of the worst areas, in terms of dirt and smells, are near the city center where poor people gather to beg for money from the rich and well-to-do.

We met two young ladies who became our guides, as well as my traveling companions impromptu girlfriends. I learned something else that I know love. Everyone, and I mean everyone, kisses wherever they want to. No, not just kissing, really going for it. Pressed against the wall, kissing and tugging the others hair. Laying the park on a sunny afternoon, lazily caressing and tasting the other lips. Every alcove in the subway has some lovers in it, both young and old. The city is full of love and passion. When friends meet they happily kiss each other upon the cheeks and give warm hugs. Everyone touches each other, maybe to steady oneself on the subway or perhaps just to hold their friends arm as they cross the street.

Generosity is also a huge part of the culture here. I can’t tell you how many times I went out with new friends to enjoy something only to have them jump to grab the bill or buy the ticket. I spent more time putting my money away than spending it on some days. Fortunately, they are happy to receive gifts as well. I have been able to cook meals for friends here that they have never had before such as Indian and Thai food. It has been so nice being able to share and share alike with all of the new people I have met in the short time I’ve been here.

Ok, there are some down sides. For one, this city is way, way too big! We spend an hour jostling between metro trains in the subway just to reach the middle of town. If you want to go to the outskirts you should plan for a two hour commute. There are no chairs available on the metro most of the time so you end up standing a lot. I’ve really come to love the luxury of sitting on something even remotely soft throughout the course of a normal, touristic day. It’s worth it most days though. The neighborhoods of this city are so eclectic that you feel like you are traveling to new towns all of the time. In fact decades ago that’s exactly what they were. A whole assortment of towns that surrounded the growing metropolitan that is Mexico city. Coyocan is the coolest neighborhood by far with hippy markets and awesome coffee shops tucked in everywheree.

Another surprising aspect of the city is people here show a conspicuous lack of interest in strangers well being. It’s not that they don’t care, it’s just not their problem. When a friend I met down here tried to show me a cool coffee shop we found that we couldn’t enter. Two costumers were fighting in the doorway. Actually, one person was fighting and the other person was just bleeding everywhere. Onlookers and staff stood by as this whole tragic affair unfolded. When we tried to return later we realized we would not be drinking there that night since police blocked the sidewalk and blood covered the ground. I didn’t feel that I was unsafe at any point but I did feel bad for the poor guy who sat there explaining the situation to the cops covered in the aftermath of his beating. It was a startling awakening to the realities of having 8.8 million people packed into such a small space. Maybe there’s just no room for compassion for everyone or perhaps it would be impossible to help everyone out. I’m not sure I know yet.

I also met a young man who had moved to Mexico city with his family from Texas a few years back. His father had been a drug runner and had killed twenty people according to him. Now no one in the family could get papers to go back across the border. He told me that violence and drugs were very prevalent in many parts of the city, especially the area we were staying in. Then again, he may have been trying to impress or scare me. I walked home late many times and never once did anyone think to bother me. It’s hard to tell what’s true since everyone experiences this city in such different ways.

So, in the end, I realize that Mexico city rests between two worlds. The world of art and museums, high fashion and gaudy lifestyle. On the other hand, a world of poverty, violence and callous attitudes to human suffering. In fact, I think these two worlds are more connected than we would like to think. The same world that allows for huge disparities in wealth is also the one that allows for the violent outburst against this injustice. I have no answers but it left me with a lot of questions about the cost of extravagance for some and grinding poverty for the masses.

My final thoughts on the city are this: You get out what you put in. I have acted with love and open attitude to what I’ve seen. In return I have been treated well by everyone I’ve met, from friends to strangers on the bus. I would gladly come back again to get to know the city better and spend more time amongst the people. I think there is still a lot of the city and culture I have not encountered in the ten days I’ve spent here. From what I’ve seen though it would be well worth it to keep learning more about this amazing cosmopolitan city.
Posted by Beyond borders at 5:24 PM